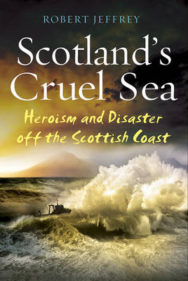 Scotland’s Cruel Sea: Heroism and Disaster off the Scottish Coast

High cliffs jutting out into the Atlantic and the North Sea, many hundreds of rocky skerries, deep sea lochs, dangerous unseen reefs, powerful tides and gales that batter the land fiercely from all points of the compass…Scotland has a coastline of immense beauty and danger, and its cruel sea has claimed many lives down the years. Disaster at sea is a poignant part of Scotland’s history, and in this chilling and awe-inspiring book, bestselling author Robert Jeffrey tells the compelling stories of the victims of the ocean deeps. Car ferries, fishing boats, troopers, pleasure yachts and Navy vessels of all sorts, including submarines, have gone to the bottom. And in brave attempts to save those in danger with lifeboats, many have died. Including the famous tales of the Princess Victoria, the ill-fated Kl3 submarines, the Longhope lifeboat and the Iolaire, Scotland’s Cruel Sea remembers the maritime tragedies that made headlines and became part of the folk memory of a seagoing nation.

Robert Jeffrey is a long-serving Glasgow journalist and the former managing editor of the Herald group of newspapers. His many bestsellers include Glasgow’s Hard Men, Blood on the Streets, Glasgow’s Godfather and Gentle Johnny Ramensky.