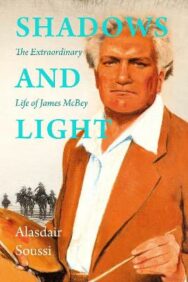 Shadows and Light: The Extraordinary Life of James McBey

Creative genius, war artist, adventurer, lover. These are just some of the words that can be used to describe Aberdeenshire-born painter and printmaker James McBey (1883-1959).McBey was a Scottish superstar amongst the creative spirits that fuelled the Etching Revival of the late nineteenth century and Etching Boom of the early twentieth century, and in an historical context, was the acknowledged heir to Whistler and Rembrandt.But after his death in Tangier, Morocco, in 1959, his renown as one of Britain’s most accomplished artists – who took the art world by storm – faded from public consciousness.Born illegitimately in the tiny parish of Foveran, Aberdeenshire, in the late Victorian era, he was brought up by his blind mother and elderly grandmother amid the rigid Presbyterian confines of Scotland’s north-east. Tragedy, dreary work as a bank clerk and a craving for success on his own terms all precipitated his leaving Aberdeen to live the life of an artist in London where he quickly became one of the most-talked about creatives of his generation.At the heart of this biography – the first ever to be published on McBey – is his time as a war artist in the Middle East during the Great War – where he would meet and paint T. E. Lawrence – his many love affairs, marriage to the beautiful American, Marguerite Loeb, and his enduring passion for Morocco.Drawing on his many diaries and letters and artistic creations, this is the story of one man who – clever, kind, intrepid, dashing, insecure and flawed – triumphed against the odds.

Alasdair Soussi is a freelance journalist, writer and filmmaker from Glasgow. In recent years he has covered the Scottish independence debate and Brexit, and has made short films for Al Jazeera’s social media platforms.