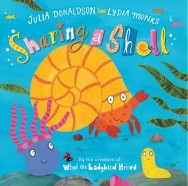 Three friends, sharing a shell, Down by the sparkling sea, Rollicking all round the rock pool In their wonderful home for three. When the litte hermit crab finds a shiny new shell, at first he doesn’t want to share it — not with a blobby purple anemone and a tickly bristleworm, anyway! Join Crab, Blob and Brush in a story of sea, shells, and friendship — and all about learning how to share. Now available as a chunky board book with a glittery cover that’s perfect for younger readers, SHARING A SHELL was the first ever story from the bestselling picture-book pairing of Julia Donaldson and Lydia Monks, who have since gone on to create such classics as WHAT THE LADYBIRD HEARD and THE SINGING MERMAID. Praise for THE SINGING MERMAID. ‘[A] tip-top adventurous ballad which will hold its readers captive.’ – Guardian ‘[…] a delightful rhyming adventure.’ – Daily Mail

Reviews of Sharing a Shell

The verse sparkles as much as the pictures. Independent on Sunday

Julia Donaldson, the 2011-13 UK Children’s Laureate, is the outrageously talented, prize-winning author of the world’s most-loved picture books, including THE GRUFFALO. Julia also writes fiction as well as poems, plays and songs – and her brilliant live children’s shows are always in demand. Lydia Monks is one of the most original picture book artists working today. Her distinctive use of colour and collage has won her critical acclaim and several awards, including the Smarties Prize. Her collaborations with Julia include WHAT THE LADYBIRD HEARD, THE SINGING MERMAID and SUGARLUMP AND THE UNICORN.