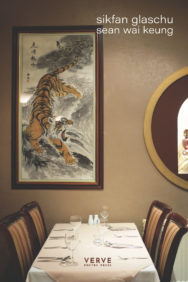 sikfan glaschu is an exploration of identity and authenticity, told through the lens of the city of Glasgow and its restaurants, cafes, languages, histories and lockdowns. By using the city as a starting point, Sean Wai Keung examines his own relationship to food, migration and family, as well as the very notion of ‘belonging’ somewhere in the first place.

Sean Wai Keung is a Glasgow-based poet and performer. His pamphlet you are mistaken won the Rialto Open Pamphlet Competition 2016 and he has also released how to cook and be happy, both with Speculative Books. He has developed solo performances with the National Theatre of Scotland, where he was a Starter Artist in 2017, Anatomy Arts, Magnetic North and the Fringe of Colour, and is also a poetry editor at EX/POST magazine. He holds degrees from Roehampton University, London, and the University of East Anglia, Norwich and has been published in 404Ink, Blood Bath, datableedzine and The Suburban Review, amongst others.