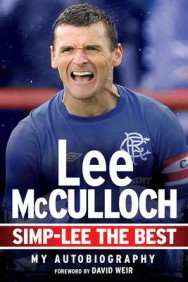 Simp-Lee the Best: My Autobiography

Lee McCulloch plays for Rangers and is club captain. He signed for his boyhood heroes in July, 2007 in a GBP 2 million transfer from Wigan and he has helped the club to three SPL titles and a UEFA Cup Final. His popularity with the Rangers fans has increased dramatically in recent months during the turmoil at Ibrox. When others walked out, Lee stated he would play for the club for nothing and was also the first player to pledge his future to the Rangers newco. In his explosive autobiography, McCulloch opens up on the turmoil at Rangers in the past two years as the club was sold by Sir David Murray to Craig Whyte and the historic events that followed from administration to liquidation and to the club being reformed under Charles Green. He lifts the lid on the remarkable and fascinating inside story from the dressing-room and their battles with those in power at Ibrox. From his humble upbringing in Lanarkshire where he was driven to succeed in football by his strict disciplinarian father, to joining Rangers and how his first season there left him in tears and regretting the decision to move to Ibrox, this book has it all.Lee was also a success at Wigan and was the club’s record signing when he joined them from Motherwell in 2001 for GBP 700,000. He was recently voted into their all-time Greatest XI and tells the story of their rise to the English Premiership and the part he played. Lee has been capped for his country 18 times and tells what it was like to play under five Scotland managers – Berti Vogts, Walter Smith, Alex McLeish, George Burley and Craig Levein. He also reveals boozing sessions with Berti Vogts left him shocked and opens his heart on why he quit Scotland under George Burley and the bust-ups that followed with the SFA. With his high profile as Rangers captain, his loyal following including more than 50,000 Twitter followers, and his unique insight into the recent turmoil at Ibrox, Lee McCulloch’s autobiography is Simp-Lee the Best.