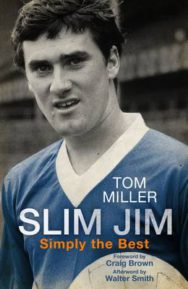 Jim Baxter was one of Scotland’s greatest-ever football players, a left-footed wonder who became a Rangers icon and a leading member of the celebrated Scotland side of the 1960s. In this insightful biography, Tom Miller takes an in-depth look at the legend known as Slim Jim. Baxter joined Rangers in 1960 for a then record transfer fee of GBP 17,500 and quickly showed his worth, helping them to an incredible run of ten trophy victories between 1960 and 1965. He also played an instrumental role in Scotland’s strong international run, especially playing against England, where in 1963 he scored both goals in a 2-1 victory after Scotland were reduced to ten players. And his 1967 game of keepieuppie, while waiting for teammates to get into position, in the midst of the British Home Championship has gone down in football history. Yet off the field, Baxter was a contradictory character. Though an affable man who eschewed the sectarianism that blighted Glasgow football, he was also a gambler and regularly drank to excess. After stints at Sunderland and Nottingham Forest, his football career ended with a brief spell at Rangers again. Baxter died of pancreatic cancer in 2001.In this insightful biography, lifelong fan Tom Miller brings Slim Jim and his passion for Rangers to life, capturing the halcyon days of 1960s football and charting the rise and fall of arguably the greatest footballer Scotland has ever produced.

Tom Miller has a wealth of experience reporting and broadcasting on Scottish football and has worked for Rangers TV as their match commentator for the last seven years. Tom can also be regularly heard on talkSPORT and Radio Clyde and was previously involved in that iconic football show Scotsport. In 1963 Tom was captivated listening to Jim Baxter and his Scottish team beat England at Wembley, with the wireless commentary still vividly recalled as it brought the game to life.