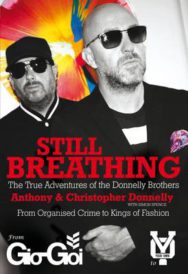 Still Breathing: The True Adventures of the Donnelly Brothers

Brothers Anthony and Christopher Donnelly were raised in, and grew up surrounded by, what was allegedly one the UK’s most legendary and elusive crime families – Manchester’s Quality Street Gang. How they found riches and fame as celebrated fashion kings is one of the most astonishing stories in the history of the rag trade. In their early twenties, as Acid House and street clothing pioneers, they were called both ‘ambassadors for a generation’ by Vivienne Westwood and ‘a menace to society’ by Parliament. Their fashion label, Gio-Goi, became a worldwide hit at the height of the ‘Madchester’ phenomenon, sported by the Happy Mondays, New Order, The Stone Roses and many more. Then, in 1994, Anthony was jailed as part of a huge police investigation into the Quality Street Gang, and The Donnelly Brothers lost everything amid lurid ‘drugs and guns’ headlines. After years in the wilderness, they made a remarkable comeback in 2005 with Pete Doherty (then dating Kate Moss) designing a high-profile collection for the re-launched Gio-Goi.Further attention-grabbing headlines featuring Robbie Williams, Artic Monkeys, Liam Gallagher, Kasabian, Rihanna, Amy Winehouse, Plan B, Calvin Harris and Deadmau5 emphasized the label’s runaway success. The Donnelly Brothers were more notorious than ever as Gio-Goi hit the top of The Sunday Times Fast Track 100 in 2009 with a nineteen million pound turnover. They bought a pub, promoted club nights in Ibiza with Cream, made award winning pop videos and launched new hit fashion labels, Your Own [YO] and Mas-if. Gio-Goi was hit by further scandal in 2013 and a spectacular crash saw investors, including The Donnelly Brothers, lose millions. The saga of the brand continues. Anthony and Christopher’s journey from creeping and rifling safes, ticket touting and bootlegging pop merchandise to the front page of Vogue is told here for the first time – in their own words.

Co-author Simon Spence collaborated with Andrew Loog Oldham on the acclaimed memoirs Stoned and 2 Stoned. His latest book is The Stone Roses: War and Peace.