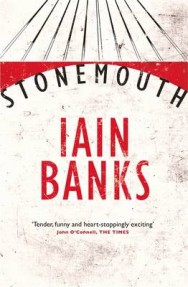 Stewart Gilmour is back in Stonemouth. After five years in exile his presence is required at the funeral of patriarch Joe Murston, and even though the last time Stu saw the Murstons he was running for his life, staying away might be even more dangerous than turning up. An estuary town north of Aberdeen, Stonemouth, with it’s five mile beach, can be beautiful on a sunny day. On a bleak one it can seem to offer little more than seafog, gangsters, cheap drugs and a suspension bridge irresistible to suicides. And although there’s supposed to be a temporary truce between Stewart and the town’s biggest crime family, it’s soon clear that only Stewart is taking this promise of peace seriously. Before long a quick drop into the cold grey Stoun begins to look like the soft option, and as he steps back into the minefield of his past to confront his guilt and all that it has lost him, Stu uncovers ever darker stories, and his homecoming takes a more lethal turn than even he had anticipated. Tough, funny, fast-paced and touching, Stonemouth cracks open adolescence, love, brotherhood and vengeance in a rite of passage novel like no other.

Readable, gripping … One of his best — Evening Standard William Leith 'There is more than a shade of Pip and Estella in Stewart and Ellie, and to create an emotionally satisfying while intellectually convincing ending is a rare achievement … Beguiling Guardian The mythology of Stewart's past, and of Stonemouth itself, is utterly absorbing. Addictive, funny, and brilliantly observed Daily Mail Banks at his waspish, intelligent, nuanced best. His fans will give thanks Scotland on Sunday