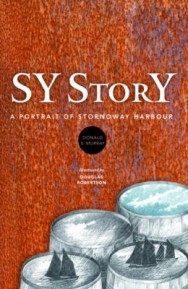 Lewisman Donald S. Murray tells in his inimitable verse and prose Stornoway’s story from the days when Mesolithic people sheltered there to its present-day life as a bustling, modern harbour, casting light on men and boats, native herring girls and island visitors, the town’s triumphs and tragedies. These include such events as the sinking of the Iolaire, the ship which went down with over 200 soldiers as they returned home from World War I, the departure of the Metagama to Canada in 1923, packed with islanders on their way to start a new life in North America, and the dramatic arrival of the fishing boat the Astrid, with 29 refugees from Soviet Estonia, in 1948. Accompanying the work are 20 striking and distinctive illustrations from, Douglas Robertson, as well as over 30 photographs. All of this comes together to capture both the past and present of the port, making the book a delight both for those who know the town well and the many holiday-makers who explore its harbour during summer months.

Donald S. Murray was born in Ness in the Isle of Lewis. An author and journalist, his poetry, prose and verse has been shortlisted for both the Saltire Award and Callum Macdonald Memorial Award. His work has also appeared in a large number of national anthologies and on BBC Radio 4 and Radio Scotland. He won a Robert Louis Stevenson Fellowship in 2012 and a Jessie Kesson Fellowship in 2013. His most recent book, The Guga Stone, was recently nominated as one of the Guardian Best Nature Books of 2013.He lives and works in Shetland. Douglas Robertson has exhibited widely throughout Scotland and the UK, and has collaborated with Donald Murray on a number of projects.