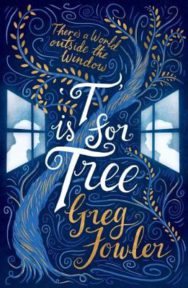 T is for Tree

Eddy knows he’s not like other teenagers. He doesn’t look like them. He doesn’t think like them. He doesn’t go to school or have friends like they do. Eddy’s not even allowed to leave his bedroom – except on shower day of course. He doesn’t know why; all Eddy knows is that he’s different.Abandoned by his mother and kept locked away by his grandmother, Eddy must spend his life watching the world go by from his bedroom window. Until Reagan Crowe moves in next door and everything starts to change. She’s kind, funny, beautiful, and most importantly, she’s Eddy’s first friend. Over time, Reagan introduces Eddy to the strange and wonderful world outside his bedroom: maths, jam, love.But growing up isn’t that simple for either of them. And Eddy has a secret. The tree that’s slowly creeping in through his window from the garden is no ordinary tree. But then again, Eddy’s no ordinary boy. He’s special…Set over the course of five years, T is for Tree is moving, life-affirming, and shows that we can all find greatness in the small things.

Greg Fowler lives in Wellington, New Zealand with his wife and three children. Outside of his love for writing, Greg is a professional risk consultant who worked in Washington DC with the likes of military contractors to the Pentagon during the Iraqi Conflict. Greg’s passion for storytelling started when he was about ten years old and never faded. It was only thanks to agentle nudge from his wife Fiona that his work moved from a pile of pages gathering dust in a spare room to appearing next to his inspirations in a bookstore. As for the future, Greg intends to make time for the rest of those stories to fall out of his head and on to the page.