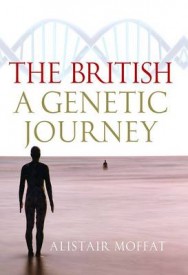 The British: A Genetic Journey

Hidden inside all of us – every human being on Earth – is the story of our ancestry. Printed on our DNA are the origins of our lineages, the time in history and prehistory when they arose, and the epic journeys people have made across the globe. Based on exciting new research involving the most wide-ranging sampling of DNA ever made in Britain, Alistair Moffat, author of the bestselling The Scots: A Genetic Journey, shows how all of us who live on these islands are immigrants. The last ice age erased any trace of more ancient inhabitants, and the ancestors of everyone who now lives in Britain came here after the glaciers retreated and the land greened once more. In an epic narrative, sometimes moving, sometimes astonishing, always revealing, Moffat writes an entirely new history of Britain. Instead of the usual parade of the usual suspects – kings, queens, saints, warriors and the notorious – this is a people’s history, a narrative made from stories only DNA can tell which offers insights into who we are and where we come from.

Alistair Moffat was born and bred in the Scottish Borders. A former Director of the Edinburgh Festival Fringe and Director of Programmes at Scottish Television, he now runs the burgeoning Borders Book Festival as well as a production company based near Selkirk.