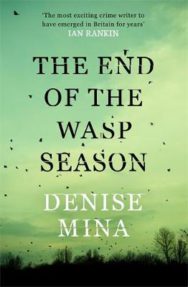 Home > Fiction from Scotland > The End of the Wasp Season

The End of the Wasp Season

When notorious millionaire banker Lars Anderson hangs himself from the old oak tree in front of his Kent mansion his death attracts no sympathy. One less shark is little loss to a world nursing a financial hangover. But the legacy of a life time of self-serving is widespread, the carnage most acute among those he ought to be protecting: his family. He leaves behind two deeply damaged children and a broken wife. Meanwhile, in a wealthy suburb of Glasgow, a young woman is found savagely murdered in her home. The genteel community is stunned by what appears a vicious, random attack. When DS Alex Morrow, heavily pregnant with twins, is called in to investigate, she soon discovers that behind the murder lurks a tangled web of lies. A web that will spiral through the local community, through Scotland and ultimately right back to a swinging rope hundreds of miles away. The End of the Wasp Season is an accomplished, compelling and multi-layered novel, which traces the damaging consequences of one man’s selfish actions in a world ravaged by recession and questioning everything it previously held sacred.

Critically acclaimed Glaswegian crime writer Denise Mina is the author of nine novels. She also writes short stories and in 2006 wrote her first play. She is a regular contributor to TV and radio. Her novels THE END OF THE WASP SEASON and GODS AND BEASTS have both won the prestigious THEAKSTONS OLD PECULIER CRIME NOVEL OF THE YEAR AWARD. She is the only author to ever win the award two years running. www.denisemina.co.uk