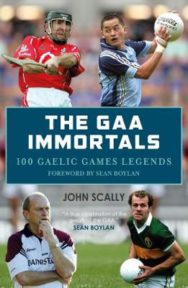 The lore and legend of Gaelic Games has been shaped by great players. Since Adam was a boy special players have had a unique power to make the heart skip a beat.This book celebrates 100 of them: footballers, hurlers, managers, ladies’ footballers and camogie players from the start of the twentieth century to the present day. The book is based around exclusive interviews with a who’s who of Gaelic games. And it covers all the GAA codes.Icons of the games featured include: Dick Fitzgerald, Mick Mackey, Christy Ring, Jack Lynch, Nicky Rackard, Mick O’Connell, Sean O’Neill, Eddie Keher, Jimmy Barry-Murphy, Angela Downey, Sue Ramsbottom, Nicky English, DJ Carey, Peter Canavan, Henry Shefflin, Gooch Cooper and Joe Canning. And there’s plenty to read for GAA fans of any age.Every county has their own stars and each county is represented here. All 32 counties are featured.

"Nothing adorns the rich history of the GAA like a great player. This book is a true celebration of the greats of the GAA." SEAN BOYLAN; "John Scally's latest book celebrates the fantastic players, the unforgettable games, the great rivalries and the wonderful pride in parish and county that is part and parcel of the GAA." EILEEN DUNNE

John Scally is a lecturer in Trinity College, but in his spare time is a writer and broadcaster. Since 1992 he has written 40 books with cumulative sales of over 150,000 copies. He is the author of the biggest selling GAA book in Ireland, Raising the Banner: The Biography of Ger Loughnane, and for a few years his biography of Tony Ward was the biggest selling rugby book in Ireland.