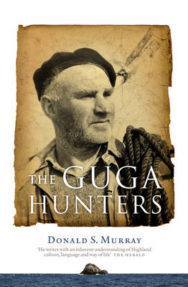 From the puffin to the fulmar, the gannet to the cormorant, the sea-bird was once a commonplace meal, served on dinner plates across the length and breadth of Scotland. Now, however, it only remains on the menu in one of the farthest edges of the country. Every year, ten men from Ness, at the northern tip of the Isle of Lewis, sail north-west for some forty miles to a remote rock called Sulasgeir. Their mission is to catch and harvest the guga; the almost fully grown gannet chicks nesting on the two hundred foot high cliffs that circle the tiny island, which is barely half a mile long.After spending a fortnight in the arduous conditions that often prevail there, they return home with around two thousand of the birds, pickled and salted and ready for the tables of Nessmen and women both at home and abroad. “The Guga Hunters” tells story of the men who voyage to Sulasgeir each year and the district they hail from, bringing out the full colour of their lives, humour and the drama of their exploits. They speak of the laughter that seasons their time together on Sulasgeir, of the risks and dangers they have faced.It also provides a fascinating insight into the social history of Ness, the culture and way-of-life that lies behind the world of the Guga Hunters, the timeless nature of the hunt, and reveals the hunt’s connections to the traditions of other North Atlantic countries. Told in his district poetry and prose, English and – occasionally – Gaelic, Donald S. Murray shows how the spirit of a community is preserved in this most unique of exploits.

Donald S. Murray was born in Ness in the Isle of Lewis. An author and journalist, his poetry, prose and verse has been shortlisted for both the Saltire Award and Callum Macdonald Memorial Award. Published widely, his work has also appeared in a number of national anthologies and on BBC Radio 4 and Radio Scotland. He lives and works in Shetland.