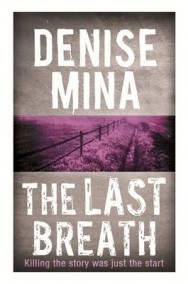 Everything is going well for journalist Paddy Meehan. She finally has a flat of her own, and the job she always wanted, as one of Scotland’s leading newspaper columnists. Then the police knock at her door with the news that her former lover, Terry, has been found in a ditch, shot through the head. Even though they’d split up months before, Paddy is down as the next of kin, and has been left everything, including a box of notebooks…As Paddy tries to uncover what it was Terry wanted her to discover, it soon becomes clear that he was about to expose a secret. A secret worth killing for. And Paddy is next in line…

Reviews of The Last Breath

Denise Mina is wonderful. It took only one book for me to become a true fan Michael Connelly Powerful, passionate and compelling. Mina can chill your blood and break your heart in the same sentence Mark Billingham Magnificently readable THE TIMES One of the most exciting writers to have emerged in Britain for years Ian Rankin Remember the name. This is a major talent heading for the top LITERARY REVIEW