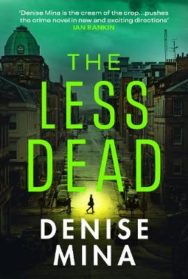 ‘Denise Mina is the cream of the crop, an author who pushes the crime novel in new and exciting directions and never fails to deliver.’ IAN RANKINWhen Margo goes in search of her birth mother for the first time, she meets her aunt, Nikki, instead. Margo learns that her mother, Susan, was a sex worker murdered soon after Margo’s adoption. To this day, Susan’s killer has never been found.Nikki asks Margo for help. She has received threatening and haunting letters from the murderer, for decades. She is determined to find him, but she can’t do it alone…A brilliant, thought-provoking and heart-wrenching new thriller about identity and the value of a life, from the award-winning author of The Long Drop and Conviction.PRAISE FOR DENISE MINA:’You won’t be able to put Conviction down’ Reese Witherspoon’Unsettling, evocative and staggeringly good’ Daily Express’A masterpiece by the woman who may be Britain’s finest living crime novelist’ Daily Telegraph’An atmospheric recreation of a vanished Glasgow…and a compelling exploration of the warped criminal mind’ The Times on The Long Drop: Top Ten Crime Novels of the Decade

Reviews of The Less Dead

Denise Mina is the author of the Garnethill trilogy, the Paddy Meehan series and the Alex Morrow series. She has won the Theakston Old Peculier Crime Novel of the Year Award twice and was inducted into the Crime Writers’ Association Hall of Fame in 2014. The Long Drop, her latest novel, won the McIlvanney Prize for Scottish Crime Book of the Year and the Gordon Burn Prize. Denise has also written plays and graphic novels, and presented television and radio programmes. She lives and works in Glasgow.