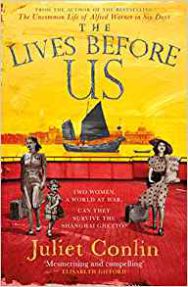 Home > The Lives Before Us

The Lives Before Us

“I wasn’t sure I liked the sound of it. Even my vivid imagination could hardly fathom a place as tight, or dense, or narrow as Shanghai.”

It’s April 1939 and, with their lives in Berlin and Vienna under threat, Esther and Kitty – two very different women – are forced to make the same brutal choice. Flee Europe, or face the ghetto, incarceration, death.

Shanghai, they’ve heard, Shanghai is a haven – and so they secure passage to the other side of the world. What they find is a city of extremes – wealth, poverty, decadence and disease – and of deep political instability. Kitty has been lured there with promises of luxury, love, marriage – but when her Russian fiancé reveals his hand she’s left to scratch a vulnerable living in Shanghai’s nightclubs and dark corners. Meanwhile, Esther and her little girl take shelter in a house of widows until the protection of Aaron, Esther’s hot-headed former lover, offers new hope of survival.

Then the Japanese military enters the fray and violence mounts. As Kitty’s dreams of escape are dashed, and Esther’s relationship becomes tainted, the two women are thrown together in the city’s most desperate times. Together they must fight for a future for the lives that will follow theirs.

A sweeping story of survival, community and friendship in defiance of the worst threat to humanity the world has ever faced. From the author of the extraordinary The Uncommon Life of Alfred Warner in Six Days, The Lives Before Us will particularly resonate with readers of Jeremy Dronfield (The Boy Who Followed His Father into Auschwitz), Anthony Doerr (All the Light We Cannot See), Heather Morris (The Tattooist of Auschwitz), and Costa-winner Bart van Es (The Cut Out Girl).

Juliet Conlin was born in London and grew up in England and Germany. She holds an MA in Creative Writing from Lancaster University and a PhD in Psychology from the University of Durham. She works as a writer and translator and lives with her husband and four children in Berlin. She writes in both English and German. Her novels include ‘The Fractured Man’ (Cargo, 2013) and ‘The Uncommon Life of Alfred Warner in Six Days’ (Black & White Publishing, 2017). Her third novel, ‘The Lives Before Us’, will be published in March 2019 (Black and White Publishing). Subscribe to Juliet’s newsletter, NOTES FROM BERLIN, www.julietconlin.com/notes-from-berlin.