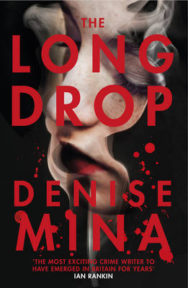 William Watt wants answers about his family’s murder. Peter Manuel has them. But Peter Manuel is a liar. William Watt is an ordinary businessman, a fool, a social climber. Peter Manuel is a famous liar, a rapist, a criminal. He claims he can get hold of the gun used to murder Watt’s family. One December night in 1957, Watt meets Manuel in a Glasgow bar to find out what he knows. Based on true events, The Long Drop is an extraordinarily unsettling, evocative and compelling novel from a writer at the height of her powers.

After a peripatetic childhood in Glasgow, Paris, London, Invergordon, Bergen and Perth, Denise Mina left school at 16 before doing her law degree at Glasgow University. She subsequently studied for a PhD at Strathclyde. Her first novel, Garnethill, was published in 1988 and won the CWA John Creasy Dagger for Best First Crime Novel. She has published 12 novels including the Garnethill series, Paddy Meehan and Alex Morrow series’. She has been nominated for many prizes including the CWA Gold Dagger and has won the Theakstons Old Peculier Crime Novel of the Year Award twice. In addition to novels, Denise has also written plays and graphic novels including the graphic novel adaptation of The Girl With A Dragon Tattoo. In 2014, she was inducted into the Crime Writers’ Association Hall of Fame and was a judge for the Bailey’s Prize. She has also presented TV and radio programmes as well as appearing regularly in the media. She lives and works in Glasgow.