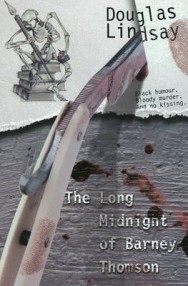 Ten years on from its initial release comes a new edition of the cult comedy, which The Scotsman described as “gleefully macabre, hugely enjoyable black burlesque”. Published to critical acclaim in early 1999, the book has spawned a successful series, has been translated into several European languages and is currently in development to be a major Hollywood motion picture. Barney Thomson, awkward, diffident, Glasgow barber, lives a life of desperate mediocrity. Shunned at work and at home, unable to break out of a twenty year rut, each dull day blends seamlessly into the next. However, there is no life so tedious that it cannot be spiced up by inadvertent murder, a deranged psychopath, and a freezer full of neatly packaged meat. Barney Thomsons uninteresting life is about to go from 0 to 60 in five seconds, as he enters the grotesque and comically absurd world of the serial killer

Reviews of The Long Midnight of Barney Thomson (Book 1)