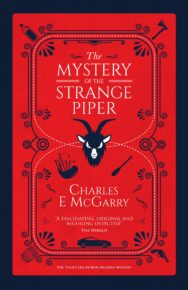 The Mystery of the Strange Piper

Leo Moran is not your average private detective. An avowed gourmet and wine connoisseur, he enjoys the pleasures of life to the hilt in the splendid isolation of his West End apartment. Ordinarily, his most pressing concerns involve which vintage of wine to pair with the finest organic steak, but at times he has more unsettling concerns: visions of violent crimes.

Asked by an old acquaintance to investigate a curse which is said to haunt the beautiful Scottish Isle of Sonna, Moran finds himself drawn into an extraordinary drama of envy, shame and vengeance. He investigates the events of summer 1989, when a group of high-spirited teenagers dabbled in an occult ritual… with tragic consequences. The teenagers are now in middle age, but acrimony persists over that terrible night. Death strikes again, and Leo realises that his presence on the island is not welcome, and that there are dark forces at work beyond his imagining.

Charles E McGarry is a Scottish author. His first novel in the Leo Moran series of detective fiction, The Ghost of Helen Addison, was published in July 2017 to rave reviews. The follow-up, The Shadow of the Black Earl, was published in September 2018. His third Leo Moran book, The Mystery of the Strange Piper, will be published by BackPage Press in September 2021. Charles is also the co-author of the critically-acclaimed The Road to Lisbon, a novel set against the backdrop of Celtic’s victory in the European Cup in 1967.