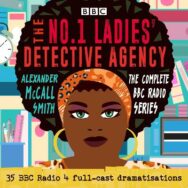 The No.1 Ladies’ Detective Agency: The Complete BBC Radio Series

ALEXANDER McCALL SMITH grew up in Zimbabwe and now lives and works in Scotland. He is the author of many books for children and adults with settings all over the world, and is best known for his series The No.1 Ladies’ Detective Agency. Alexander has received numerous awards for his writing. In 2004 he became the winner of two Author of the Year awards, and in 2007 he received a CBE for services to literature. He was also honoured by the President of Botswana for his services through literature to the country in 2011. Every year Alexander visits Botswana, as well as travelling to other countries, visiting bookshops and literary festivals and meeting with readers across the globe.