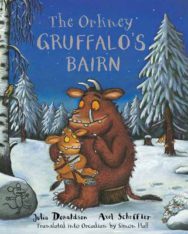 In 2015, following on from the huge success of James Robertson’s Scots translation of The Gruffalo, Itchy Coo published four dialect versions: the Orkney, Shetland, Doric and Dundee Gruffalos have all proved immensely popular as celebrations of the Scots language’s astonishing regional diversity.Simon Hall’s Orkney version of The Gruffalo is now followed by The Orkney Gruffalo’s Bairn. A cautionary tale about what happens when a small Gruffalo leaves the comfort of its cave and sets off into the dark wood on a wintry night, this is sure to be another big hit in Orkney and with Orcadian speakers wherever they bide.

Julia Donaldson, the 2011-2013 Children’s Laureate, is the outrageously talented, prize-winning author of the world’s most-loved picture books including The Gruffalo and What the Ladybird Heard. The Gruffalo, illustrated by Axel Scheffler, is now a children’s classic and publishing phenomenon; celebrating 15 years in 2014, selling over 3 million copies worldwide, was voted Great Britain’s favourite bedtime story on BBC Radio 2 and was adapted and broadcast as an animation on BBC 1.Simon Hall is a secondary school teacher, a poet, and author. He studied Scottish Language and Literature at Glasgow University where he was awarded the Ewing Prize for Scottish Literature. Since 2014 he has been one of Education Scotland’s Scots Language Co-ordinators, supporting schools in the teaching of Scots and development of Scots language resources. He is the author of The History of Orkney Literature (2010) which was joint winner of the Saltire Society’s First Book of the Year award.