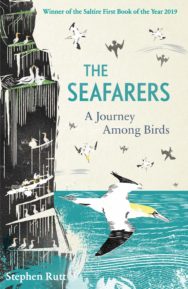 The British Isles are remarkable for their extraordinary seabird life: spectacular gatherings of charismatic Arctic terns, elegant fulmars and stoic eiders, to name just a few. Often found in the most remote and dramatic reaches of our shores, these colonies are landscapes shaped not by us but by the birds.

In 2015, Stephen Rutt escaped his hectic, anxiety-inducing life in London for the bird observatory on North Ronaldsay, the most northerly of the Orkney Islands. In thrall to these windswept havens and the people and birds that inhabit them, he began a journey to the edges of Britain. From Shetland, to the Farnes of Northumberland, down to the Welsh islands off the Pembrokeshire coast, he explores the part seabirds have played in our history and what they continue to mean to Britain today.

The Seafarers is the story of those travels: a love letter, written from the rocks and the edges, for the salt-stained, isolated and ever-changing lives of seabirds. This beguiling book reveals what it feels like to be immersed in a completely wild landscape, examining the allure of the remote in an over-crowded world.

Stephen Rutt is a birder, naturalist and freelance feature writer whose work has appeared in Earthlines Magazine, Zoomorphic, The Harrier, Surfbirds, BirdGuides and the East Anglian Daily Times. In 2016 he escaped his hectic, anxiety-inducing life in London to spend seven months at the bird observatory on North Ronaldsay, the most northerly island in the Orkney archipelago, where this book was born. He currently lives in Dumfries.