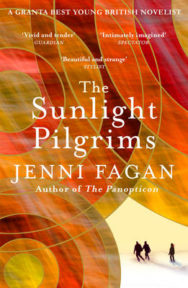 From the highly acclaimed author of The Panopticon and one of Granta’s Best Young British Writers comes the new novel THE SUNLIGHT PILGRIMS. Set in a Scottish caravan park during a freak winter – it is snowing in Jerusalem, the Thames is overflowing, and an iceberg separated from the Fjords in Norway is expected to arrive off the coast of Scotland – The Sunlight Pilgrims tells the story of a small Scottish community living through what people have begun to think is the end of times. Bodies are found frozen in the street with their eyes open, midst economic collapse, schooling and health care are run primarily on a voluntary basis. Dylan, a refugee from panic-stricken London who is grieving for his mother and his grandmother, arrives in the caravan park in the middle of the night – to begin his life anew. Under the lights of the aurora borealis, he is drawn to his neighbour Constance, a woman who is known for having two lovers, her eleven-year old daughter Stella, who is struggling to navigate changes in her own life, and elderly Barnacle, so crippled that he walks facing the earth.But as the temperature drops, daily life carries on: people get out of bed, they make a cup of tea, they fall in love, they complicate. The Sunlight Pilgrims, the thrilling follow-up to The Panopticon, is a humane, sad, funny, shimmeringly odd and beautiful novel about absence, about the unknowability of mothers. It is a story about people in extreme circumstances finding one another, and finding themselves.

Jenni Fagan was born in Scotland, and lives in Edinburgh. She graduated from Greenwich University with the highest possible mark for a student of Creative Writing, and won a scholarship to the Royal Holloway MFA. A published poet, she has won awards from Creative Scotland, Dewar Arts and Scottish Screen among others. She has twice been nominated for the Pushcart Prize and was shortlisted for the Dundee International Book Prize, the Desmond Elliott Prize and the James Tait Black Prize. Jenni was selected as one of the Granta’s Best Young British Novelists in 2013 after the publication of her highly acclaimed debut novel, The Panopticon.