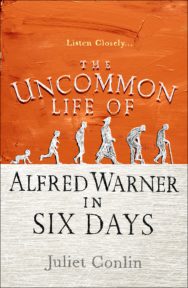 The Uncommon Life of Alfred Warner in Six Days

Shortly before Christmas, 79-year-old Alfred Warner arrives at Berlin’s busy central train station, to meet his granddaughter Brynja for the first time. When she fails to arrive, Alfred, afraid and alone, is taken in by a stranger, Julia, who quickly realises that there is something remarkable about him. Worried sick, Alfred discovers that his granddaughter is lying in a coma in a Berlin hospital following an unexplained accident and may take months to fully recover. After the sympathetic Julia insists he stays at her home for Christmas, Alfred becomes increasingly anxious and announces that his time is running out and that he has only six days left to live. He knows this because the voices he has been listening to for his entire life have told him so. Alfred insists he must tell Julia his life story in the hope of saving Brynja’s life after he is gone. If Brynja does recover, she must finally learn the truth about the voices. And so, over the ensuing six days he pours out his extraordinary tale.He tells Julia how, at the age of six, he began to hear voices, how soon afterwards he was tragically orphaned and of his terrifying ordeal at the hands of the Nazis as he grew up during the rise of the Third Reich. He also recounts how he was conscripted into the German army and how his life changed when he was captured and imprisoned in a POW camp in Scotland. Upon release he built a new life for himself in Britain, meeting the love of his life and raising a family. However, as we learn, his path through life’s rich tapestry has undulated in some very unexpected ways. It has been a most uncommon life, but the one constant during each stage of his journey are the voices which accompany him, voices which for other members of his family, including Brynja, have been far less benign. Now Alfred’s final duty is to make sure that Julia understands so that Brynja does not become yet another family tragedy.

Juliet Conlin was born in London and grew up in England and Germany. She holds an MA in Creative Writing from Lancaster University and a PhD in Psychology from the University of Durham. She works as a writer and translator and lives with her husband and four children in Berlin. She writes in both English and German. Her debut novel The Fractured Man was published by Cargo in 2013. She is currently working on her third novel, Exile Shanghai, set in a Jewish ghetto in 1940’s China.