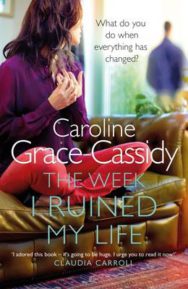 Home > Fiction from Scotland > The Week I Ruined My Life

The Week I Ruined My Life

Living in the future is a dangerous game, but the present just isn’t supplying the happiness Ali Devlin desires. She rolls the dice…Ali Develin never had any doubts about marrying Colin, but two beautiful children and twelve years later she is overwhelmingly doubtful. Where is the man she fell in love with? Why does she not feel the same way about him anymore? What has happened to them? When did it all go so wrong, and how is she ever going to fix it? Reigniting her passion for the arts, she finds a job in the City Arts Centre after years as a stay at home mammy. Befriending artist-in-residence, Owen O’Neill, Ali can’t help but compare him to Colin. He is everything Colin isn’t anymore: respectful, charming, caring, and undeniably sexy. There is definitely chemistry, but Ali isn’t the type of woman to have an affair, is she? Unsure of exactly what she wants, one week in December a work trip to Amsterdam throws up the changes she desired. Changes she couldn’t have seen happening. Changes that ruin her life.

Caroline Grace-Cassidy is an Irish writer and actress. She trained as an actress at the Gaiety School of Acting before landing her first role as Mary Mull on BAFTA award-winning children’s programme Custers Last Stand Up. She then went on to appear in various productions for BBC, RTE, TG4 and TV3, alongside a variety of feature films. Turning to full-time writing in 2011, Cassidy has published four novels. In 2012 Cassidy was a founding member of an all female Film & TV Production Company, for which she has written, produced and directed five short films. Her first feature film script is completed and in development. Cassidy is a contributor for Woman’s Way, U Magazine, Irish Country Magazine and has been a regular panellist for the Midday show on TV3 since 2012.