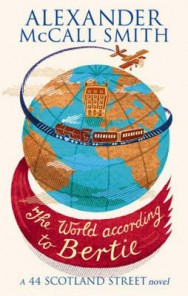 Home > Fiction from Scotland > The World According to Bertie

The World According to Bertie

Poor put-upon Bertie is still struggling to escape his overbearing mother’s influence, his yoga lessons and his pink bedroom while wondering why new baby brother Ulysses looks uncomfortably like his psychotherapist. The insufferably handsome Bruce has returned from London to land, on his feet and rent-free, in the arms of heiress Julia Donald. But all is not well among the residents of 44 Scotland Street: Angus’s dog and constant companion Cyril is under threat of execution, victim of a miscarriage of justice, while pretty, indecisive Pat and hopeless romantic Matthew are on the verge of making the most terrible mistake of their lives …Big Lou finds a new man, Matthew and Pat edge their relationship towards something more permanent – although this development is not without complications, when a glimpse of someone who just might be her handsome, caddish ex-flatmate Bruce sets Pat’s pulse racing – and Domenica’s friendship with Antonia is tested to the limit when an assortment of her belongings mysteriously appear in Antonia’s new flat.

Reviews of The World According to Bertie

Following a distinguished career as a Professor of Medical Law, Alexander McCall Smith has turned to writing full-time. He is the author of over sixty books on a wide array of subjects, and his books have been translated into thirty-six languages. He lives in Edinburgh with his wife.