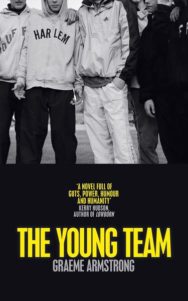 Azzy Williams is ready. Ready to smoke, pop pills, drink wine and ready to fight. But most of all, he’s ready to do anything for his friends, his gang, his young team.

Round here, in the schemes of the forgotten industrial heartland of Scotland, your mates, your young team – they’re everything.

Inspired by the experiences of its author, Graeme Armstrong, The Young Team is an energetic novel, full of the loyalty, laughs, mischief, boredom, violence and threat of life on these streets. It looks beyond the tabloid stereotypes to tell a powerful story about the realities of life for young people in Britain today.

Graeme Armstrong is a Scottish writer from Airdrie. His teenage years were spent within North Lanarkshire’s gang culture. He was inspired to study English Literature following his reading of Irvine Welsh’s Trainspotting at just sixteen. Alongside overcoming his own struggles with drug addiction, alcohol abuse and violence, he defied expectation to read English as an undergraduate at the University of Stirling; where, after graduating with honours, he returned to study a Masters’ in Creative Writing. His debut novel, The Young Team is inspired by his experiences.