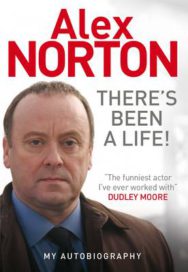 There’s Been a Life! My Autobiography

Since his first tentative steps on stage, Alex Norton’s career has been both highly colourful and eventful beyond his wildest dreams. His journey from the streets of Glasgow’s notorious Gorbals to blockbuster Hollywood movies has rarely been smooth but in a career spanning six decades he has pretty much seen it all – and done most of it. It was the fairer sex that first attracted the teenage Alex to acting and, as soon as he discovered it was a great way to meet girls, he was hooked for life. After early appearances on Dr Finlay’s Casebook, Alex’s career took a bit of a slump but as jobbing actor in London in the late Sixties he met and played guitar with a young Davy Jones as they worked together as extras on a movie. The next time he saw him, David Bowie had hit the big time. He has worked with Billy Connolly, Dudley Moore, Rowan Atkinson, Chick Murray and a host of other British stars and appeared in iconic movies like Gregory’s Girl, Local Hero and Braveheart.He nearly managed to kill Clint Eastwood on a movie shoot in Africa, has had whale for dinner with Jon Voight in Moscow, played Captain Bellamy alongside Johnny Depp in Pirates of the Carribean: Dead Man’s Chest and made an everlasting mark on British television as DCI Matt Burke in Taggart. Uproariously funny and highly entertaining, Alex Norton takes us on an irreverent journey behind the scenes of a showbiz life very well lived.