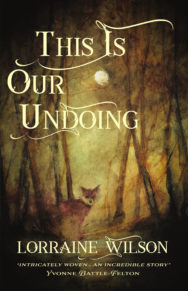 Home > Fiction from Scotland > Gothic Thriller > This Is Our Undoing

This Is Our Undoing

Could you condemn one child to save another?

In a near-future Europe fracturing under climate change and far-right politics, biologist Lina Stephenson works in the remote Rila Mountains, safely away from London State.

When an old enemy dies, Lina’s dangerous past resurfaces, putting her family’s lives at risk. Trapped with her vulnerable sister alongside the dead man’s family, Lina is facing pressure from all sides: her enemy’s eldest son is determined to destroy her in his search for vengeance, whilst his youngest carries a sinister secret…

…But the forest is hiding its own threats and as a catastrophic storm closes in, Lina realises that if she is to save her family, she must become a monster.

Lorraine Wilson lives by the sea in Scotland, writing speculative fiction set in the wilderness and heavily influenced by folklore. After gaining a PhD in behavioural ecology from the University of St. Andrews in Scotland she spent several years as a conservation researcher in odd corners of the world before turning to writing.
She has published short fiction and non-fiction in anthologies by Boudicca Press, Ellipsis Zine, The Mechanics’ Institute Review and Retreat West, amongst others; and magazines including Anti-Heroin Chic, Cabinet of Heed, The Forge, Geometry, Strange Horizons and Terse Journal.