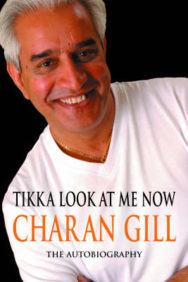 Tikka Look at Me Now: The Charan Gill Story

This is the amazing success story of Charan Gill – Europe’s Curry King. You could hardly come from humbler beginnings than Charan Gill and you could hardly rise much higher. Charan arrived in Glasgow from the Punjab in India at the age of nine with little understanding of Western culture. Although bright and articulate, he was denied a university education and, instead, began as an apprentice turner at a shipyard on the Clyde. Charan went on to found and head a multimillion-pound empire as ‘Europe’s Curry King’. After working as a waiter in a friend’s restaurant, Charan was offered the chance to buy it over and he begged and borrowed to do just that. Ultimately, he masterminded the Harlequin Restaurant Group – the largest chain of Indian Restaurants in Europe – turning the national passion for curry into a thriving empire of seventeen restaurants in Scotland. The recipient of numerous awards for his achievements, including an MBE and an Honorary Doctorate from the University of Paisley, Charan has had an extraordinary life, full of remarkable success. Now hear from the man himself exactly how he did it, why he wouldn’t change a thing, and what’s next for Europe’s Curry King.

Charan Gill MBE has received many prestigious rewards in recognition of his achievements over the years including an Honorary Doctorate from the University of Paisley and Asian Entrepreneur of the Year. Having sold his Harlequin empire in a multimillion-pound deal in 2005, Charan is now concentrating on building links between Scottish and Indian companies wishing to grow in a global marketplace.