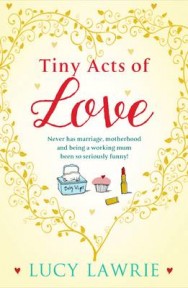 Surviving motherhood? It’s all about having the right support network. Lawyer and new mum Cassie has a husband who converses mainly through jokes, a best friend on the other side of the world, and a taskforce of Babycraft mothers who make her feel she has about as much maternal aptitude as a jellyfish. Husband Jonathan dismisses Cassie’s maternal anxieties, but is he really paying attention to his struggling wife? He’s started sleep talking and it seems there’s more on his mind than he’s letting on. Then sexy, swaggering ex-boyfriend Malkie saunters into Cassie’s life again. Unlike Jonathan, he ‘gets’ her. He’d like to get her into bed again, too…And on top of all her emotional turmoil, she also finds herself advising a funeral director on ghost protocol and becomes involved in an act of hotel spa fraud, never mind hiding cans of wasp spray all over the house to deal with the stalker who seems to be lurking everywhere she looks. Marriage and motherhood isn’t the fairytale Cassie thought it would be. Will her strange new world fall apart around her or will tiny acts of love be enough to get her through?Funny, perceptive and real, Tiny Acts of Love portrays the rawness of motherhood, the flipside of love and the powerful lure of paths not taken.

Lucy Lawrie worked as a lawyer for several years, specialising in employment and pensions law. Then, on maternity leave, she unearthed a primary two homework book in which she’d stated, in very wobbly handwriting: ‘I want to be an AUTHOR when I grow up.’ So, to keep her six-year-old self happy, she wrote her first novel.