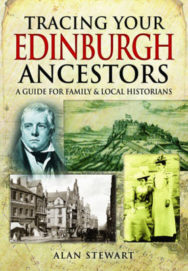 Tracing Your Edinburgh Ancestors: A Guide for Family and Local Historians

Edinburgh has been the capital of Scotland for the last 500 years and more. The ‘Athens of the North’ is the centre of Scottish banking, medicine, architecture, law and publishing. It is the home of Scotland’s national museums and the location of the Queen’s official residence in Scotland and of the General Assembly of the Church of Scotland. It is also the site of the Edinburgh Festival and Royal Military Tattoo, and the seat of the devolved Scottish government. The city is steeped in national, local and family history, and Alan Stewart’s handbook is the perfect guide to it. He takes readers through the story of Edinburgh from the earliest times up to the present day, showing how its colourful history has affected the lives of their ancestors. The many genealogical records of Edinburgh are described in detail, and appendices cover genealogy websites, family history societies, and Edinburgh’s many archives, museums, art galleries, castles and palaces.

Alan Stewart has been a keen researcher of family history for the last thirty years. He has written for all the major family history magazines and also for the Financial Times, The Times, Independent and the Encyclopaedia Britannica. His books include How to Make It in IT, Gathering the Clans: Tracing Scottish Ancestry on the Internet, Grow Your Own Family Tree, My Ancestor Was Scottish, My Ancestor Was Irish and London and Middlesex Family History Resources Online.