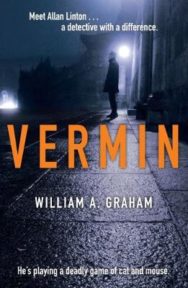 When an expensively dressed, well-spoken Englishman walks into the Dundee office of Allan Linton and Associates, Inquiry Agents, and says he’s heard that Allan has a talent for finding people, it seems like a pretty ordinary case. The Englishman wants Allan to trace a young woman called Tina Lamont. Trouble is that Tina Lamont might not be her real name and she might not even be from Dundee. The only clue is a photograph of a young woman wearing a school uniform. As Allan and Niddrie, his only Associate — ex-army and with a range of skills very different to his claim of being in the Pay Corps – get the investigation underway, there seems to be no trace of the girl anywhere. But when a dead body turns up, Allan realises he isn’t the only one trying to find Tina. As events spiral out of control, the news that the girl is also being hunted by some serious London criminals takes events to a whole new and disturbing level – and that’s before Dundee’s biggest drugs dealer gets involved. And to complicate matters there’s Allan’s high-flying lawyer ex-wife to deal with and his teenage daughter, Ailsa, who’s being harassed by the captain of the school rugby team. Taut and electrifying, Vermin brings a brand new and compelling voice to Scottish noir.

William A. Graham was born and raised in the west end of Dundee. He worked for a large publishing company based in Dundee for more than thirty years, mostly editing children’s comics. As an avid reader of American crime fiction, there was only one kind of book he wanted to write. William now lives in Carnoustie with his wife and two Jack Russell terriers.