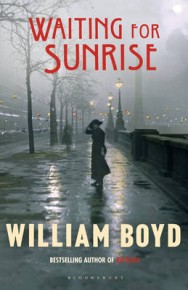 Vienna, 1913. Lysander Rief, a young English actor, walks through the city to his first appointment with eminent psychiatrist, Dr Bensimon. Sitting in the waiting room he is anxiously pondering the particularly intimate nature of his neurosis when a young woman enters. Lysander is immediately drawn to her strange, hazel eyes and her unusual, intense beauty. Her name is Hettie Bull. Their subsequent affair is both passionate and particularly destructive. Moving from Vienna to London’s West End, from the battlefields of France to hotel rooms in Geneva, Waiting for Sunrise is a feverish and mesmerising journey into the human psyche, a beautifully observed portrait of wartime Europe, a plot-twisting thriller and a literary tour de force.

Reviews of Waiting for Sunrise

William Boyd is one of our most cherished writers … Waiting for Sunrise is as much A Dance to the Music of Time as Any Human Heart, a giddy burlesque where characters, particularly figures of erotic obsession, vanish only to reappear unexpectedly … It's the sort of novel you finish then begin again to revisit your favourite bits … More than anything, Waiting for Sunrise is a gleeful celebration of storytelling – sly, clever, frequently hilarious, always involving. For me at least this is the literary event of the year The Times There are few more reliable literary pleasures than a Boyd novel. Over three decades he has established himself as one of Britain's most popular and highly regarded novelists … He is a novelist who writes intelligent books about plausible and fully rounded characters, brimming with challenging ideas and themes. Above all, he is a storyteller nonpareil — Mick Brown Telegraph Boyd guides the reader with a master's hand. It's ages since I read a novel that offers such breathlessly readable narrative enjoyment, such page-by-page storytelling confidence and solidity. Waiting for Sunrise is a homage to thriller writers, spy novels and crime detection stories and films from a hundred years ago, stretching from Sherlock Holmes, via Buchan and Greene, to Hitchcock Independent An intricately plotted world of spies, lies and the double cross … a coming of age story about an individual's self enlightenment, as much as a sui generis thriller. Waiting for Sunrise proves that rarest of beasts: a tantalisingly experimental work that is also an immensely satisfying page turner Sunday Telegraph Boyd's run of first-rate literary thrillers continues with this nerve-jangling First World War-era tale — Benjamin Evans Sunday Telegraph Boyd's sophisticated espionage thriller succeeds in capturing the eve-of-war atmosphere of 1913 Vienna Observer