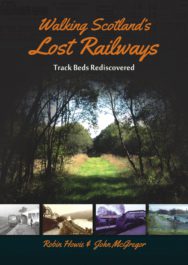 Scotland still has hundreds of miles of ‘dismantled railways’, the term used by Ordnance Survey, and the track beds give scope for many walks. Some track beds have been ‘saved’ as Tarmacadam walkway/cycleway routes while others have become well-trodden local walks. The remainder range from good, to overgrown, to well-nigh impassable in walking quality.

This book provides a handy guide to trackbed walks with detailed information and maps. It is enhanced by numerous black and white old railway photographs, recalling those past days, and by coloured photographs that reflect the post-Beeching changes. The integral hand-crafted maps identify the old railway lines and the sites of stations, most of which are now unrecognisable.

The ‘Railway Age’ is summarised and describes the change from 18th century wagon ways and horse traction to the arrival of steam locomotives c.1830. The fierce rivalry that then ensued between the many competing companies as railway development proceeded at a faster pace is recounted. Although walkers may be unaware of the tangled history of the development of the railway system during the Victorian era, many will have heard of, or experienced, the drastic 1960s cuts of the Beeching axe. However, in more recent times Scotland has experienced a railway revival – principally in the Greater Glasgow area but with new stations and station re-openings elsewhere. The long awaited 30-mile Borders Railway from Edinburgh to Tweedbank, the longest domestic railway to be built in Britain for more than a century, is something on a very different scale. Early passenger numbers have exceeded expectations and towns served by the line have seen significant economic benefits.

Many railway enthusiasts cling to the hope that more lines will be reinstated. Meanwhile, those walks offer a fascinating and varied selection of routes that can fill an afternoon, a day or a long weekend – an ideal opportunity to get walking!

Robin Howie: Robin hopes to complete his tenth round of Munros together with a fourth round of subsidiary tops in 2011, with each hill climbed and explored in a variety of ways. As well as climbing all the Corbetts, he has completed a round of Munros since a hip replacement – each one climbed solo and on every day of the year. He has experienced high altitude climbing in Antarctica, South America and East Africa and has also climbed in Borneo, the Philippines, Norway, Mongolia and Cuba.