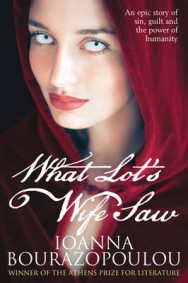 It’s been twenty-five years since the Overflow flooded Southern Europe, drowning Rome, Vienna and Istanbul, and turning Paris into a major port. At the Dead Sea, the earth has opened up to reveal a strange violet salt to which the world has become addicted, and a colony has been established by the mysterious Consortium of Seventy-Five to control the supply. Run by murderers, fugitives and liars, the Colony is a haven to those fleeing Europe – especially the privileged “Purple Stars”. But when the governor of the Colony dies suddenly and mysteriously, the six officials turn on each other, sparking a terrifying chain of events which threatens the very existence of the Colony. In Paris, Phileas Book, the greatest crossword compiler of his age and creator of the Epistleword, is recruited by the sinister Consortium. Presented with the epistolary confessions of the six, he is ordered to sift truth from lies to find out who killed the unpopular Governor Bera. But as Phileas starts to unravel the mystery, he begins to realise that these are no ordinary letters and that nothing less than the course of human history is at stake.What Lot’s Wife Saw is an astonishing and beautifully written novel about the fear, sin and guilt that lurks in the dark corridors of the human conscience. It is a story on an epic scale about betrayal, sacrifice and unconditional love, and a darkly humorous parable recalling the Biblical tales of God’s terrible rage and the fate that befell those who suffered it. But, above all, it is an enthralling vision of a nightmarish world which only the power of humanity can change.

Ioanna Bourazopoulou was born in Athens in 1968 and writes novels and plays. What Lot’s Wife Saw won the prestigious 2007 Athens Prize for Literature and this is the first time her work has been brought to a new audience in English.