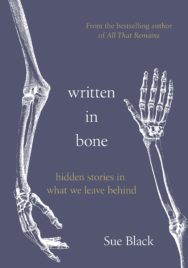 Home > Science and Nature > Written In Bone: hidden stories in what we leave behind

Written In Bone: hidden stories in what we leave behind

Drawing upon her years of research and a wealth of remarkable experience, the world-renowned forensic anthropologist Professor Dame Sue Black takes us on a journey of revelation. From skull to feet, via the face, spine, chest, arms, hands, pelvis and legs, she shows that each part of us has a tale to tell. What we eat, where we go, everything we do leaves a trace, a message that waits patiently for months, years, sometimes centuries, until a forensic anthropologist is called upon to decipher it.

Some of this information is easily understood, some holds its secrets tight and needs scientific cajoling to be released. But by carefully piecing together the evidence, the facts of a life can be rebuilt.

Limb by limb, case by case – some criminal, some historical, some unaccountably bizarre – Sue Black reconstructs with intimate sensitivity and compassion the hidden stories in what we leave behind.

Professor Dame Sue Black is one of the world’s leading anatomists and forensic anthropologists. She is also the Pro-Vice Chancellor for Engagement at Lancaster University. She was the lead anthropologist for the British Forensic Team’s work in the war crimes investigations in Kosovo, and she was one of the first forensic scientists to travel to Thailand following the Indian Ocean tsunami to provide assistance in identifying the dead. Sue is a familiar face in the media, where documentaries have been filmed about her work, and she led the highly successful BBC 2 series History Cold Case. Sue was appointed Dame Commander of the Order of the British Empire in the 2016 Queen’s Birthday Honours for services to forensic anthropology. She is the author of the critically acclaimed Sunday Times bestseller All That Remains.