A deft experiment in form, Aliyyah evokes the spirit of classic Arabian tales, whilst probing timely issues of science, materialism, religion and Western politics. It is a love story and a mystery, set in an unnamed, war-torn country.

Extract from Aliyyah
By Chris Dolan
Published by Vagabond Voices

Once Haldane woke everything was white. White ceiling, white walls, a white door open just enough to reveal a white corridor beyond. He moved his head and felt a murmur of pain somewhere. On the far wall the white was finally broken by an open window looking out on to a perfectly green tree with bright red buds. He dozed off and woke again to the same scene, several times over, until he was fully awake and strong enough to move his body. The same pain no matter which limb he moved. He pulled the white sheets back and saw that his left leg was bandaged from the ankle to the knee. He managed to sit up, and then stand without the pain becoming much worse. He hobbled towards the half-open door, and called out.

Glancing back into the room he saw it contained only the bed he had been lying in and a chair, over which was a neatly draped uniform. Under the chair was a black box, about the size of a car battery, bent and battered. He turned and limped out into the long white narrow corridor. After about ten steps it opened out into a landing, at the left-hand side of which another window framed another green and red tree waving in a perfectly blue sky. The steps down into the rest of the house looked steep.

Leading with the bandaged leg and holding on to the banister he made his way slowly down. There were pictures on the wall, portraits, of men mostly. But he had to concentrate on the steps, each of them of different depth, like the ones in the old manse.

The hall below had more portraits on the walls and a brightly patterned rug on the floor. There was a door to his left which must lead, he thought, out to the fruiting trees. A door behind the steps probably led to kitchens. In front of him were three more doors, one of which was open a crack and gave Haldane the impression of being occupied. On the flat he found he could walk more or less normally. He knocked and opened the door a little more.

The room was huge, several rugs or carpets, intricately patterned, covered less than half the floor. There were low tables made of carved wood, numerous chairs and divans, cushions of many colours on the furniture, all set on the floor’s bright green tiles. On a table at the far end sat a samovar and two glasses, and at the window stood a small figure staring out into the sun and a garden.

The man turned around. He seemed to Haldane, perhaps because he was at the other end of such a vast room, tiny. Dressed in a long white robe, a light brown waistcoat over it, and an embroidered hat, the little man smiled and held both his hands in the air. Behind his little groomed beard his smile was welcoming. Haldane thought it the most perfectly uncomplicated smile he had ever seen. 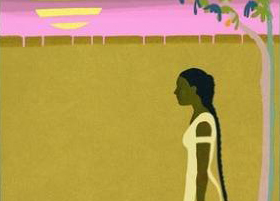