‘Already the dawn is filled with their white flashing wings and their shrieking cries.’

Mike Tomkies lived alone in a remote Highland lochside cottage for twenty years without electricity, gas, telephone or postal service. Studying the wildlife around him, the one-time Hollywood journalist gives a remarkable picture of the whole cycle of nature through the seasons, from winter’s frequent storms through to spring heralding the return of migratory birds.

The loch is like nature’s eye set in the earth between the mountains, reflecting the moods of the sky, the changing colours of the hills, and in the lush season the leafy trees fringe its shores like rows of lashes. Like an eye, it responds sensitively to every breeze, every arrowing zephyr that ruffles its surface, and to summer gales that send its waters into surging billows of green and blue that end with turgid crashings of milky foam upon the white banks of gravel. In winter storms its sombre fathoms are lashed into black troughs, and pounding waves as glassy white as the frost or snow that lie upon the land smash against the jagged outcrops of granite. But it is on a calm blue day in spring that it is at its most beautiful, when the bitter lash of winter has departed and the migratory birds return to bestow upon its broad molten bosom their brilliant flashing colours, the sight of their love displays, the music of their voices – the living beauty for which the lonely human dweller on its shores has waited for so long. 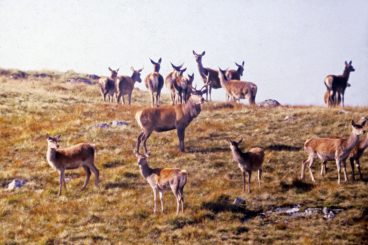 A master stag taking up his place among the hinds and showing a proprietary attitude, though not yet roaring.

It is then the water carnival begins, with a dipper landing with a slight plop near the boat bay, swimming buoyantly in the mini-billows, diving its plump white-breasted body below the surface for food. Sometimes it clings to a submerged rock and preens itself. Each time it dislodges dust specks from its plumage with screw-like motions of its head, along comes a wavelet to slap the dirt away. Once I was lucky enough to see it walking underwater, holding on to stones with its feet and angling its back so the flow of the burn pressed its body down as it searched upstream for water larvae and nymphs. A pair of gaudy shelducks appear by Heron Island, their startling greeny-black, chestnut and white plumage flaunting the `law’ that female ducks are always more dowdy than the drakes, for only the knob at the top of the drake’s bright red beak distinguishes him from his partner. 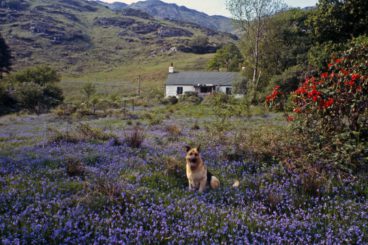 Moobli, the gentle giant Alsatian. He helped me trek after wildlife in 300 square miles of glens and forests.

By now the first common gulls have returned from winter by the sea to roost on the nearest islet where they will form a breeding colony; already the dawn is filled with their white flashing wings and their shrieking cries as they dispute tiny territories. As the fish life stirs from the winter depths of the loch, and the hibernating frogs come out to look for mates, a lone heron floats in each dawn like a blue-grey wraith, to fish the shore or try its luck along the burn. Now too are heard the eerie drawn-out mewing wails, like those of a large lost cat when heard from a distance, of the great black-throated divers who have returned from wintering on the coasts further south. No sound is more evocative of Highland wildness than these mournful calls, and as these rare birds preen and wash, throwing themselves sideways on the misty surface, their creamy bellies send glimmering reflecting ripples across the loch. Now and then a few red-breasted mergansers, back from the salt water estuaries, swim by in pre-mating groups, calling to each other with harsh prolonged ‘kawyaw‘ squalls. The untidy dark green double head crests of the males make them look like country yokels with greased hair, all spruced up for a trip to the seaside. Along the shore sandpipers are staking their territories, and as we walk down to our boat they clearly feel we are the trespassers, for away they go piping shrilly ‘swee de tit, swee de tit‘ with flickering gliding flight, to land on a stone not far away, bob their tails and then pipe us aboard. 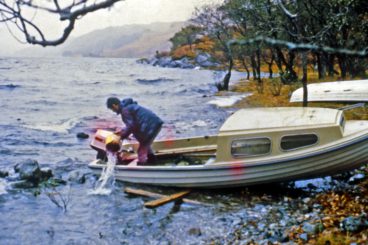 Just as these spring players arrive, so do winter characters depart. The white-fronted geese, with their glossy dark barred chest plumage, leave the mossy area at the west end of the loch and forage all the shores for the best new grazings before their long flight back to the Arctic tundra where they nest. At dawn and dusk long skeins travel westwards down the loch, already in shallow V formation, calling softly with haunting bugling cries as if assuring each other to be of good cheer and have courage for the great 700-mile flight ahead, before they vanish into the horizon. Now too we lose the white angels, the magnificent whooper swans which have used the loch and its wetter pastures as a winter dormitory. One morning I see fourteen sliding gracefully along, bright yellow beaks parting to emit muted ‘woop woop‘ notes, as if already courting. By early April the last of them have left to nest in Iceland, northern Europe and Russia, small groups passing so low over the boat I hear their wings singing like harps. 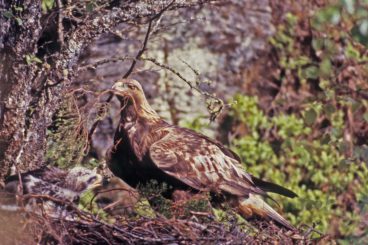 A golden eagle mother will spend many hours with its chick, though not so long when it’s seven weeks old.

Yet my sadness is momentary for I know the springtime splendours that lie ahead – the dippers, the gulls, the ducks and mergansers, the sandpipers nesting along the shore, the curlews and lapwings in the marshy meadows, and the beautiful black-throated divers perhaps breeding again on the islets. I know that the first salmon will soon be running, driving through the river shallows at night to summer in the loch before spawning up the burns in late autumn, and that the sea trout will not be far behind. I am sure that the myriads of elvers will be shimmering in from their 3,000-mile journey from the Sargasso Sea, and that now I may again see an otter’s whiskered submarine head cleaving the water as it returns from the rivers to feast upon the stirring fish life amid the green caverns of the newly growing weeds in the deeper waters.

For all its beauty at this time of year, however, I came to learn, long before I had Moobli, that the loch was my master, that it controlled my physical destiny, that on the long boat journeys to fetch supplies it cradled my very life on its swelling deep, and that if I failed to treat it with care and respect it would fashion my end.

A Last Wild Place by Mike Tomkies is out now published by Whittles priced £18.99.

‘Silver provides a valuable path through a period of transition and social change, a time when histo …

‘An old man used to live close to this place on a raised beach, a chin on the west face of the islan …