Glowglass by Kirkland Ciccone is about a new beginning – a chance to start afresh. Starrsha Glowglass has grown up in a cult. Suddenly and dramatically her world has changed, unleashing exciting opportunities. But, as everyone who has done a SWOT analysis knows, Opportunities are followed by Threats… We spoke to author Kirkland Ciccone ahead of publication of his new book for young adults.

Where did the idea come from?

I wanted to write a story about a girl with secrets, which sounds like a good start for any Young Adult (YA) novel. The word ‘Glowglass’ came to me one night whilst scribbling notes and I had no idea what it meant. I love it though. What does it mean? Does it mean anything? But that’s how inspiration works. I decided it would be the surname of my protagonist.

I also wanted to write something to do with Hipster Revivalism. You see it in the supermarket with vinyl records being sold next to the hair dye, and you also see it in YA novels like Tape and 13 Reasons Why. There’s a certain vogue with tape cassettes, records, and other old tech.

Finally, I had a notion to write a book in Second Person Narrative. I ended up having the main character Starrsha speaking directly to the reader. Starrsha Glowglass is from a small cult, a technologically-backwards religion that has been invented by her father as a tax dodge. So of course she would narrate the book through a rubbish old camcorder. It isn’t just a stylistic choice on my part. It actually helps the story unfold as readers will see for themselves.

Through the novel, I say a few things about the world around me. Nobody escapes my books unscathed.

How does Glowglass sit alongside your 3 previous novels – Conjuring The Infinite, Endless Empress and North Of Porter?

My books are punk in spirit. It’s really important to me that I feel like I’m doing something a bit different.

I write quirky books and Glowglass is another one. Quirky seems to be more palpable to readers than ‘weird’. The only book of mine I think veers into outright weirdness is Endless Empress, which is probably my favourite alongside this one.

Glowglass has some noticeable similarities to my other novels. There’s a twist in the tale – I love plot twists. I’d rather have a plot twist than a twisted ankle, that’s for sure.

There are also themes of peer pressure, bullying, secrets and lies in all my books. There’s often a sense that…what you think you know is completely wrong. I think Glowglass sits quite snugly alongside my other books in that respect.

The main difference is that the structure is quite different. I’ve really cut out all the fat in my writing. There are 100 chapters in Glowglass, some short, some a big longer. If readers don’t like it, I’ll stamp my feet and yell loudly. 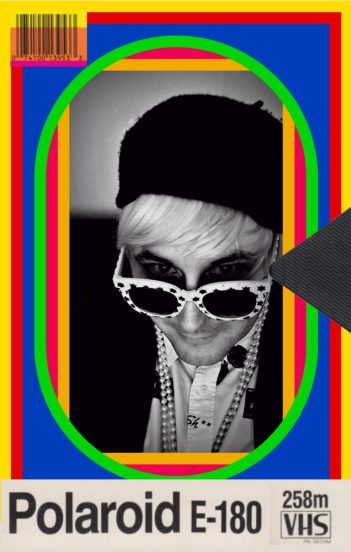 Do you hope that Glowglass will prompt discussion of particular issues?

I think a few readers will look at the characters and see themselves, or recognise certain situations.

The great thing about YA fiction is that we’ve all been to school, so the themes of my books are universal.

The other discussion it may prompt is in on of the subject matter. I don’t want to label Glowglass an LGBT book, because that’s only a small part of the novel. But it certainly takes the ‘L’ from LGBT and uses it in one of the characters. Greater emphasis in LGBT fiction for teens is usually placed on the G, B, or T parts of the acronym. Glowglass is my small way of contributing to the ‘L’ of LGBT fiction for teens.

I’m also unsure teens will look at Vloggers in the same way again once they’re introduced to Cassandra Louella Trent, AKA Cassie Trendy, the hippest girl at Morvern High, who has her own YouTube channel. I had a lot of fun writing that character.

I think readers can tell when I’m really having fun with my creations. Campbell Devine from Conjuring The Infinite always makes me laugh, because he’s utterly ridiculous. As does Portia Penelope Pinkerton from Endless Empress.

I hope my fans take to Starrsha Glowglass and enjoy her story.

Porridge plays an important part in this story. Food heaven or food hell?

Hell. I hate porridge. No matter how many times it gets rebranded or sexed up, it’ll always be sludge in a bowl.

I have a habit of bashing anything I hate in my fiction. It happens in Endless Empress when a character feeds people sandwiches laced with hallucinogenic drugs. There’s also a bus that’s never on time in that book and a really bad Elvis impersonator. North Of Porter satirises z-list celebrities and the effects of the recession. Glowglass takes aim at annoying YouTube Vloggers, bad fashion, the current obsession with retro technology, and…not organised religion, but disorganised religion.

Where does your love of howdunnit and whodunnit stories come from?

I’ve got so many references and inspirations.

Conjuring The Infinite is my love letter to all the books, TV shows, and movies that scared me as a child.

But one thread that runs through all of my fiction is that there’s always someone up to something – a killer lurking, a mystery to be solved. That came from Agatha Christie. I used to watch episodes of Poirot on a black and white TV nearly thirty years ago as a small child in Cumbernauld. I was the only person in my school interested in Poirot. They were all watching Home And Away. “No,” I’d scream, “watch bloody Poirot!”

Conjuring The Infinite has such a great twist and no-one to my knowledge has seen it coming. Obviously I won’t reveal it here, but I’m so proud of it. Blame Agatha. She was an absolute genius at misdirection.

Glowglass by Kirkland Ciccone will be published on 3 May by Strident Publishing priced £7.99.

‘Lasting weight loss is not about what you eat. It’s about why and how you eat.’

‘Leonardo was nearly thirty when he drew me for the first time. His father was Piero, a notary in th …