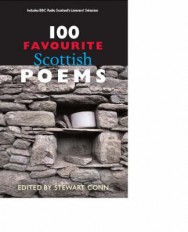 “100 Scottish Poems” brings together the best and best-loved of Scottish poetry. From anonymous medieval ballads to the renowned work of Sir Walter Scott and Edwin Morgan, the cream of the nation’s poetry – from the Borders to Shetland – is represented in this carefully chosen anthology. “100 Scottish Poems” includes the Top 20 of the nation’s favourite poetic pieces, chosen by BBC Scotland listeners in a recent web poll. Scotland’s most famous poets are represented – Robert Burns, Hugh MacDiarmid, Sorley MacLean, Muriel Spark, Iain Crichton Smith, Liz Lochhead, plus many more.

Both wit and wisdom, and that fusion of the two which can touch the heart as well as the mind, distinguishes the work selected by Stewart Conn for his anthology 100 Favourite Scottish Poems (Luath Press and Scottish Poetry Library, GBP7.99). This lovely little book ranges from Dunbar to Douglas Dunn, taking in just about all the major and most of the minor Scottish poets of the centuries by means of their most memorable writing. THE SCOTSMAN It is… a highly varied collection and one that should fulfill Conn's hopes of whetting the reader's appetite… this is both a taster and a volume of substance. THE HERALD GUIDE a richly diverse collection of poems in English, Scots, Gaelic and Shetlandic (…) They reflect not only the many traditions on which Scottish poetry has drawn, but also the range and variety of contemporary Scottish poetry, which forms the bulk of the collection. NORTHWORDS NOW This book might be better called 50 Favourites and 50 Surprises, and that's no bad thing! SCOTTISH ARTS COUNCIL

Stewart Conn was born in Glasgow in 1936, brought up in Kilmarnock, and now lives in Edinburgh. Married with two sons, he is a renowned poet, Honorary President of the Shore Poets, was the first recipient of the Institute of Contemporary Scotland’s ‘Iain Crichton Smith Award’ for services to literature, and was Edinburgh’s inaugural Makar.