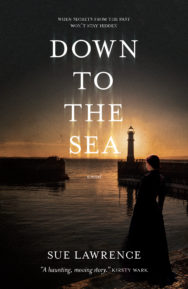 Home > Fiction from Scotland > Crime and Mystery > Down to the Sea

Down to the Sea

In 1981, Rona and Craig buy a large Victorian house up from Edinburgh’s Newhaven district – once teeming with fishing boats – which they plan to renovate and set up as a luxury care home.

But something is not quite right: disturbing sounds can be heard when the sea mists swirl; their unpredictable neighbour makes it clear that the house was not always a happy family home. And their ‘characterful’ historic pile has a gloomy cellar harbouring relics from days gone by.

Back in the 1890s, superstitious fishwives blame young Jessie for the deaths of their menfolk in a terrible storm, and she’s forced into the Newhaven Poorhouse. In those less enlightened times, life was often severe, cruel even, and Jessie is entirely at the mercy of a tyrant matron. But one inmate is not all she seems.

Jessie begins to pick at the truth, uncovering the secrets and lies that pervade the poorhouse – and which will have profound and dangerous consequences in the future.

Down to the Sea, the latest historical thriller by Sue Lawrence, powerfully evokes Victorian Edinburgh and reveals what harbour life was really like, both for fishwives and the unfortunate inmates of poorhouses.

Featuring a dual timeline – with one strand of the story set in the 1890s, the other in the 1980s – Down to the Sea conjures up the sights, sounds and smells of the 19th century in a story of revenge tinged with a hint of the supernatural.

Reviews of Down to the Sea

“Lawrence’s parallel plotlines advance in lock-step with each other over alternate chapters, with spooky similarities but also crucial differences, until they’re entwined to great effect towards the end.” Sunday Herald

“A deft mix of vivid storytelling, intriguing mystery and building momentum, skilfully interwoven with the history of the Tay Bridge disaster.” Scottish Field

“Lawrence’s novel is steeped in Scottish history and atmosphere, with twin mysteries as a hook for strong portraits of two women coping with sudden loss.” Sydney Morning Herald

As well as writing two very popular historical thrillers, The Night He Left and Fields of Blue Flax, Sue Lawrence is one of the UK’s leading cookery writers, with 18 cookbooks to her name. Having trained as a journalist, she won BBC’s MasterChef in 1991 and became a food writer, regularly contributing to Scotland on Sunday, the Sunday Times and many leading magazines. Born in Dundee and raised in Edinburgh, she now lives near Newhaven in North Edinburgh. She has won two Guild of Food Writers Awards and a Glenfiddich Food and Drink Award.