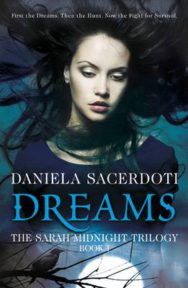 You never think it could happen to you. You never think that one day you’ll stand in a graveyard, rain tapping on a sea of black umbrellas, watching your parents being lowered into the earth, never to come back. It’s happening to me. They said it was an accident. Only I know the truth. My parents were hunters, like their parents and grandparents before them, hundreds of years back, scores of ancestors behind me, fulfilling the same call. I must follow in their footsteps. I am the only one left to keep the promise. I can never give up the fight, this fight that has been handed down to me, thrust upon my unwilling shoulders. I’d rather be buried with my parents, my brave, fierce father and mother, who lived and died by the Midnight motto: Don’t Let Them Roam. Ever since her thirteenth birthday, seventeen-year-old Sarah Midnight’s dreams have been plagued by demons – but unlike most people’s nightmares, Sarah’s come true. Her dreams guide her parents’ hunt as Sarah remains in bed, terrified but safe, sheltered from the true horrors of the Midnight legacy. But all this is about to change.After the murder of her parents, she is cruelly thrust into a secret world of unimaginable danger as she is forced to take up their mission. Alone and unprepared for the fight that lies before her, Sarah must learn how to use the powers she’s inherited and decide whom to trust before it’s too late…

Daniela Sacerdoti was born and raised in Italy but has lived in Scotland for the past ten years. She holds a degree in Classics from the University of Turin and has taught Italian, Latin and Greek – her great-uncle was the renowned Italian writer Carlo Levi. She lives in Glasgow.