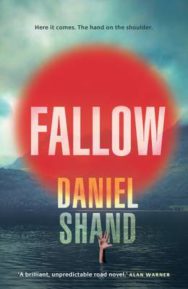 Fallow is a tense, thrilling literary novel combining elements of dark comedy and surrealism. At its heart is the relationship between two brothers bound by a terrible crime. Paul and Mikey are on the run, apparently from the press surrounding their house after Mikey’s release from prison. His crime, child murder, committed when he was a boy. As they travel, moving from one disturbing scenario to the next, they encounter a group of dishonest archaeologists, an unhinged born-again Christian, two American tourists researching their genealogy, the inhabitants of a peace camp and a religious cult headed by the powerful Brother Terry. Gradually, the brothers’ relationship begins to change and we realise there is more to their history than Paul has allowed us to know.