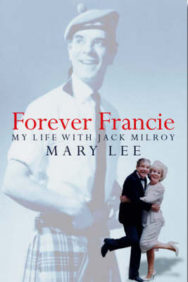 A funny, touching memoir of Jack Milroy, one of Scotland’s best-loved showbiz legends, by Mary Lee, his partner for 50 years When Mary Lee first met Jack Milroy, it wasn’t exactly love at first sight. She was the star and he was the new boy in town. At the end of their first performance together, they took a bow to thunderous applause and Mary told him, ‘Don’t get too excited – the applause is for me!’ But, from this slightly difficult start, romance soon blossomed and they went on to became one of Scotland’s most famous showbiz couples. Mary Lee and Jack Milroy were both born and brought up in Govanhill in Glasgow. Mary was a child star and, after winning a singing competition at the age of thirteen in Glasgow, she was soon starring with the Roy Fox Orchestra in London. It was a fantastic start to a showbiz career. Jack left school at the age of fourteen and was also a natural entertainer. He started off as a singer and dancer, entering all the Glasgow competitions, before joining the amateur players of the Pantheon Club.Jack saw service with the Desert Rats during World War II and Mary entertained troops all over the world with ENSA, but after the war their careers took very different directions as Mary settled down to family life and Jack built a reputation in showbiz, ultimately as one half of the legendary Francie & Josie. Forever Francie tells the story of their lives, the highs, the lows, the triumphs and the tragedies but most important of all, the humour. And Mary Lee treats us to unique behind-the-scenes tales of the legendary Francie and Josie and their rise to stardom.