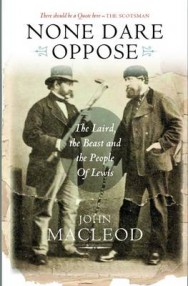 Home > History > None Dare Oppose: The Laird, the Beast and the People of Lewis

None Dare Oppose: The Laird, the Beast and the People of Lewis

In 1844 Sir James Matheson bought the Isle of Lewis, awash with hope and good intentions, only, in 1853, to put a rat-faced factor from Tain in sole charge of the estate. Within months Donald Munro, the self-styled ‘Chamberlain of the Lewis’, had seized practically every office of civic, legal and industrial power in the community and for the next two decades held the entire island under an absolute reign of terror. This is a study of Highland landlordism at once at its most benign – Sir James refused to enact Clearances in Lewis and vested thousands of his own fortune in assorted well-intended schemes, for little return; its most self-indulgent – as the baronet built a mock-Tudor castle, imported soil and trees and constructed his own Arcadian fantasy; and at its most blind – as he gaily left his tenants under the jackboot of a factor so monstrous he is still remembered with blazing hatred on Lewis, recalled in such nicknames as ‘the Shah’, ‘the Beast’ and ‘Red Donald of the Hens’.In None Dare Oppose, John Macleod paints a stunning portrait of island society in Victorian Scotland held under a capricious and feudal oppression – until one quiet, decent corner of that island fearlessly rose against the subjugation, marching on Stornoway to a gripping courtroom finale. It is an astonishing and powerful tale, beautifully accomplished and compellingly told.

Reviews of None Dare Oppose: The Laird, the Beast and the People of Lewis

'When I Heard the Bell is a somber and evocative and wholly magnificent piece of work' – Scotsman 'For those who love the beauty and splendour of written English, his newspaper columns are items to cherish' – Herald 'invigorating – The vast amount of research involved shines through every page' – West Highland Free Press

John MacLeod was born in Lochaber in 1966. After graduating from Edinburgh University, he began his career at BBC Highland in Inverness and quickly established himself as a freelance writer. He won Scottish Journalist of the Year in 1991 and contributed regularly to The Scotsman and The Herald. He is presently a columnist with the Scottish Daily Mail.