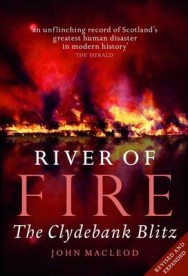 River of Fire: The Clydebank Blitz

Vibrating with endeavours for Britain’s effort against the might of Nazi Germany, Clydebank was – in hindsight – an obvious target for the attentions of the Luftwaffe. When, on the evening of 13 March 1941, the authorities first detected that Clydebank was ‘on beam’ – targeted by the primitive radio-guidance system of the German bombers – no effort was made to raise the alarm or to direct the residents to shelter or flight. Within the hour, a vast timber-yard, three oil-stores, and two distilleries were ablaze, one pouring flaming whisky into a burn that ran blazing into the Clyde itself in vivid ribbons of fire. And still the Germans came; and Clydebank, now an inferno, lay illuminated and defenceless as heavy bombs of high-explosive, as land-mines and parachute blasters began to fall …With reference to written sources and the memories of those who survived the experience, John MacLeod tells the story of the Clydebank Blitz and the terrible scale of death and devastation, speculating on why its incineration has been so widely forgotten and its ordeal denied any place in national honour.

John MacLeod was born in Lochaber in 1966. After graduating from Edinburgh University, he began his career at BBC Highland in Inverness and quickly established himself as a freelance writer. He won Scottish Journalist of the Year in 1991 and contributed regularly to “The Scotsman” and “The Herald.” He is presently a columnist with the “Scottish Daily Mail” and is the author of several books. He lives on a croft on the west side of Lewis.