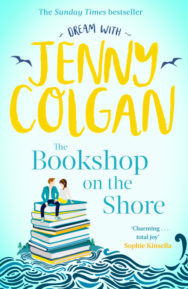 Home > Fiction from Scotland > The Bookshop on the Shore

The Bookshop on the Shore

Zoe is a single mother, sinking beneath the waves trying to cope by herself in London. Hari, her gorgeous little boy is perfect in every way – except for the fact that he just doesn’t speak, at all. When her landlord raises the rent on her flat, Zoe doesn’t know where to turn.

Then Hari’s aunt suggests Zoe could move to Scotland to help run a bookshop. Going from the lonely city to a small village in the Highlands could be the change Zoe and Hari desperately need.

Faced with an unwelcoming boss, a moody, distant bookseller named Ramsay Urquart, and a band of unruly children, Zoe wonders if she’s made the right decision. But Hari has found his very first real friend, and no one could resist the beauty of the loch glinting in the summer sun. If only Ramsay would just be a little more approachable…

Jenny Colgan is the author of numerous bestselling novels, including The Little Shop of Happy Ever After and Summer at Little Beach Street Bakery, which are also published by Sphere. Meet Me at the Cupcake Café won the 2012 Melissa Nathan Award for Comedy Romance and was a Sunday Times Top Ten bestseller, as was Welcome to Rosie Hopkins’ Sweetshop of Dreams, which won the RNA Romantic Novel of the Year Award 2013. For more about Jenny, visit her website and her Facebook page, or follow her on Twitter: @jennycolgan.