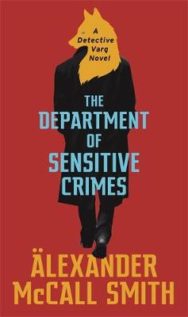 Home > Fiction from Scotland > The Department of Sensitive Crimes: A Detective Varg novel

The Department of Sensitive Crimes: A Detective Varg novel

The Girl with the Dragon Tattoo introduced us to ‘Scandi noir’. Now, welcome to Alexander McCall Smith’s world of Scandi blanc . . .Ulf Varg works in Malmo’s Department of Sensitive Crimes. Like all Scandinavian detectives he has his issues. In his case these include his unresolved feelings for his colleague, Anna; his impatience over the seeming incompetence of his irritating colleague Blomquist; and his concerns for the health of his hearing-impaired dog, Marten, the only dog in Sweden (and possibly all Scandinavia) who is able to lip-read (in Swedish).Along with his colleagues, Ulf is called upon to investigate a bizarre attack on a market trader, the disappearance of a handsome man who may or may not exist, and the affairs of a variety of young female students whose relationships with one another leave a great deal to be desired.Ulf and his team come to realise that the world is a puzzling place, lycanthropy (were-wolfism) exists and fish might have something to teach us. There is so much to learn if you are a Swedish detective, and in the first book in this new quasi-Scandinavian series, Ulf Varg embarks on these lessons with spirit and good humour.

Alexander McCall Smith is the author of over eighty books on a wide array of subjects, including the award-winning The No.1 Ladies’ Detective Agency series. He is also the author of the Isabel Dalhousie novels and the world’s longest-running serial novel, 44 Scotland Street. His books have been translated into forty-six languages. Alexander McCall Smith is Professor Emeritus of Medical Law at the University of Edinburgh and holds honorary doctorates from thirteen universities.